Recently, I had so much hosting a blab with two super smart video people, Tim Washer and Brian Fanzo. Tim knows more about adding humor to b2b video than almost anyone I know and he and I are both humor fans and improvisers as well as marketers. Brian is one the biggest and most passionate early adopters of live-streaming video I know – and he is infectious with his enthusiasm. Our blab started out with how to add fun and funny to live-streaming and we dived pretty deep into adding humor in video as well as comedy in live-streaming video. For the record, I am a nerd so do I differentiate between fun and humor / comedy. We explain that in the video. 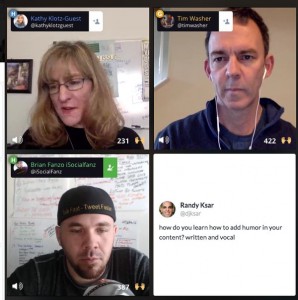 How do you add comedy in live-streaming video? It starts with being more improvisational. Have a plan for your streams, empower people, trust, and be ready to let go when the situation calls for it. As Brian says, the three most powerful words in streaming or any brand event today is “I don’t know.” Streaming audiences are forgiving – I agree. So it’s OK to experiment here. In fact, I recommend. It’s where you can play a bit and figure out what works. As Tim says, for bigger brands it is harder because it is a mix of adaptability and planned. Smaller brands have less brand legacy to worry about.

You have to trust your people and that includes influencers to carry your message. Yes, train them as you would blogging policies and let them tell their stories.

Either way, the live-streaming era is upon us. So plan, and be ready to ditch the script as needed.

You don’t need comedy in live-streaming video to be effective. Aim for being more playful and fun. It works!

Watch the Video: Fun, Funny and Comedy in Live-Streaming Video

How do you add elements of fun and “improvisation” to your live-streaming video? Or what would you like to know more about? Let me know in the comments below.