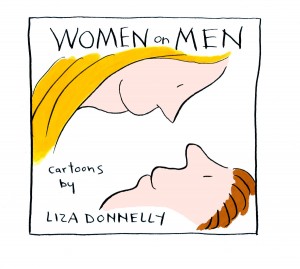 And, yes, the book has plenty of those, too. This book explores the conversations funny women have been having for years – about life and well, yes, men. Yes, guys, we talk about you when you’re not around and sometimes when you are – and that’s the point.

And as with the cartoons in this book, funny women have crossed the chasm into mainstream by talking about men in front of men. Why keep all this funny stuff to ourselves, right? 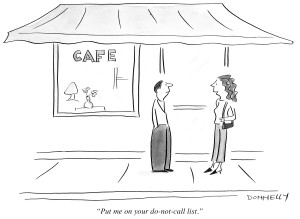 Donnelly, cartoonist for The New Yorker and author of fifteen books, understands the power of truth-telling to catalyze social change. She is a member of Cartooning for Peace and founder and editor of WorldInk.org, an organization that curates political art from all around the world. I met her at a TEDx event in San Jose in 2011 where she used cartoons to eloquently speak about media depictions of women.

The cartoons in Women on Men are incisive and witty and deal with what women think across a number of topics, although this book focuses predominantly on relationships with men through the lens of a woman’s perspective. These cartoon women are unabashedly funny (without forcing it) and honest. They are also human, vulnerable, and likeable. That’s the point – they are real women talking about the stuff real women talk about all the time. And now, yes, in front of, about, and with, men.

There’s also a larger social message here: women need to unleash their funny. The world needs it. In recent years, we’re hearing from more smart and funny women: in comedy, in the news, in politics and in marketing, a topic Donnelly discussed on my podcast. That’s a step in the right direction. But we need more. There are a lot of funny women out there – some of whom have ‘softened’ their wit in order to fit in, and not rock the boat too much. That’s a problem, because funny is an act of truth-telling. It’s time to rock the boat! The world needs more truth tellers — especially women — who have been underrepresented in conversations about social change for way too long. I was interviewed six months ago by The Glass Hammer about the role of funny women in the boardroom and the short of it is we need them.

From Boardrooms to “Broad” Rooms

How will we know when funny women have really crossed the equality threshold? When there are more unabashedly funny truth-telling women in news-making (and news-shaping) positions, in the news media telling their stories, and in corporate boardrooms sharing their experiences and calling for Leaning in or Leaning Out or whatever women need, and telling the emperor he or she has no clothes.

The funny truth-teller, the wise fool, makes it OK for all of us to be ourselves – human, vulnerable, honest, and wickedly smart. And, that is just as Liza Donnelly captures women in her latest cartoon book, Women on Men. So ladies, step up, own it, and unleash your funny. It all starts with telling your truth.

What do you think? Leave me a comment, note,joke, cartoon, etc..