How Starbucks Built a Brand with a Soul

“It’s not what you do; it’s WHY you do it.” – Starbucks’ CEO Howard Schultz 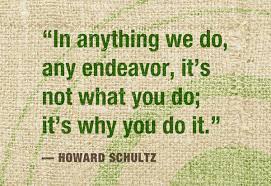 Oprah Winfrey interviewed Howard Schultz recently (December 8th) on Super Soul Sunday about Starbucks, his new book and why building a company with a soul and conscience matters.

Your Purpose is Always Bigger Than Your Product

Behind every great brand, there is a soul – a set of values and beliefs that customers see themselves reflected in. With Starbucks – it’s not about the coffee. I’ve written about this topic before: your brand story is always bigger than your products and services. Starbucks is a great example of finding and telling a bigger story. As Howard Schultz told Oprah, “It’s about building a company culture that respects people.” And coffee is about something bigger – connection and community.

“Coffee is social – it brings people together.”When Schultz worked for the original founder of Starbucks in Seattle, he tried to get the owners to serve not just coffee beans, but coffee to customer as an actual coffee bar. He wanted to create a hub of conversation and a social gathering place. They said no. Schultz moved on and kept pitching his idea to investors, and was rejected 200 times! His passion was to create the same atmosphere he experienced in coffee bars in Italy – it was about the experience, and he wanted to create a destination between work and home. Coffee was only the vehicle for this bigger vision. Eventually, Schultz raised the capital to buy Starbucks from the founders in 1987, fueled by a dream to start a company with a purpose. Schultz believed in walking in the shoes of people, and he created a people-based business.

When the company stepped away from its values to pursue profit as its raison d’ etre, business plummeted. As Schultz said, “We got away from our purpose.” What did he do? He wrote a memo to the company about getting back on track and admitted to the world that something was wrong. Starbucks lost its way, and if that had continued, he says, “it would have become a company that we would not have recognized anymore.”When we measured growth as a reason for being, we got into a spiritual crisis,” Schultz told Oprah. Schultz, who had stepped down, came back and began to make unorthodox decisions. He closed a number of stores and retrained baristas. The values of the company had been compromised by the sole pursuit of yield and profit. Schultz says, “We’re in business not for profit, but to exceed the expectations of our customers, and our people.”

Schultz made the decision to reboot the company and bring the company back from a ‘spiritual’ crisis to keep the company from losing its soul.  “I think to build a great , enduring company you must have a conscience…you must have a core purpose beyond making a profit…. balance must be struck between profit and having a conscience. You need to maintain the intimacy and smallness of being close to the customer as you grow.“

“You cannot fracture the culture and trust of the company. You can’t build something unless you take it personally,” says Schultz. At the height of its crisis, stock prices and morale dropped. Schultz gathered 10,000 employees in New Orleans to engage in team building and invited them to take business personally…..taking personal accountability. It worked. By reconnecting with its purpose – its conscience – the company came back better than ever. Over the last 2 years  Starbucks has had record revenues. Culture matters. “It is a high performing company through the lens of humanity, ” Schultz asserts.

The Power of Vulnerability and Transparency

Respect, dignity, compassion, community and human connection are core values. The entire company is based on respecting and honoring a human connection of experience. Schultz sees himself as a servant – serving his employees and his customers without compromising company values. Leadership is creating a vision people want to follow. A great leader is vulnerable, and there is vulnerability is transparency. “The currency of leadership is transparency, and there are moments you must share your conscience and soul with people,” says Schultz.

I agree.  How do you build a company with a ‘soul?’ Leave a comment!