I am no blockchain expert; yet I have friends who are and they can show you how to speak like a blockchain boss. Today, I got to chat with my friends @Kerrygorgone and @Chrisbrogan (a real expert) about blockchain on the Business SHEnanigans show. I am practically an expert by osmosis. I am at @kathyklotzguest. 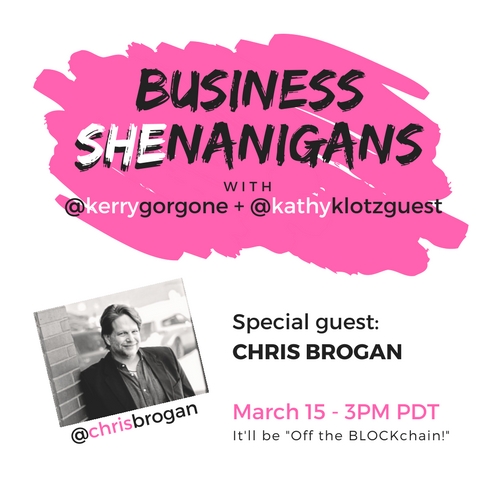 Listen In: It’s Informative and Funny

Whew! You’ll want to listen to the live stream because there are some great tidbits in there and  I did learn a  lot. If you don’t have time to put in the work to be an expert, well, let’s hack that noise and get you sounding like one. You don’t need crypto cred; your blockchain badassery will make everyone jealous. To do this, there are a few things you need to master about how to speak like a blockchain boss, and I’ve created this handy guide for you. Here are 6 ways to master the monotony of crypto, AI, machine learning and speak like a blockchain boss! You won’t be one; you’ll sure sound good and that’s all that matters. Optics. Or in this case, acoustics.

Use the Word “Blockchain” as Often as Possible

Don’t worry about context. It doesn’t matter. If people ask, “how is that relevant?” just turn that rhetorical stun-gun around on your unsuspecting interrogator: “How is NOT relevant, you know what I mean?”  You just blew some dude’s mind! That’s ballsy and you’re just the type of person to deliver it.  Unless they’re an expert, who will argue? If the person you say that to is  an expert, walk away and say, “Excuse me, this party has been ‘off the blockchain!'” Your pun is both charming and disarming. Your work is done here.

Be Sure You Use Apps as part of an ‘Ecosystem’

What’s blockchain without the app layer? Nothing. Throw in an occasional,”is the app for that done, and is it a complete ecosystem?” Enough said. You’re thinking about the whole enchilada and everyone knows enchiladas come in a chain. You don’t have time to get up to speed; you just need to hack that blockchain into bits – bite sized chain bits.

If you are vague, you’re never wrong. See above points. Specifics are for nerds; you’re just the hype person. You don’t need to get your hands dirty with all that learning. You’re the Erhlich to some nerd’s Richard. Hype people don’t need to know exactly how the sausage is made. You just need to sell the sexy change-making sizzle and how – whatever blockchain actually does – it is making the world a “better place.” Sizzle reminds me of delicious bacon. And who doesn’t like bacon?

Insist that Blockchain and Cryptocurrencies are ‘Totally Different’

Blockchain is different from cryptocurrencies like Bitcoin. It’s true. And it sounds good. Tell people as often as possible even – especially – if they don’t ask you; you’ll look preemptively smart and like you know way more than just blockchain, even though your blockchain knowledge never went to college. Who cares? You’re practically a blockchain influencer. You have ‘chainfluence.’ That’s so meta it hurts.

Tell People to Invest or They’ll “Miss the Train”

Yep, the blockchain train is coming and you need to be on it or you’re a loser. You don’t need to understand the train to lecture people about missing it. Make sure you let people know you are important and that you have invested in the technology because it’s “disruptive” and “revolutionary” (I highly recommend using air quotes to punctuate your gravitas so everyone gets that. Self-importance should be used like cologne – more is better! Rub that in peoples’ faces so they don’t forget.

Follow companies that have blockchain in their names on Twitter. Follow blockchain bots and make friends with tech bros who talk about blockchain – it’s part of your newfound chainfluence. Be sure to brag about the latest blockchain podcasts. You don’t have to listen to them; you don’t have time. You just have to let people know you know that they don’t know what you know. You know? Make sure you podcast-name drop like a boss.

Remind people you are an expert every random chance you get – while in the grocery store line, at parties, in every tweet and conversation.

How do you sound like a blockchain pro? Let me know.

Kathy Klotz-Guest is a story and creativity strategist, speaker and author. An improviser and comedian as well as an MBA, MA, Kathy brings interactivity, energy and innovation to events, talks, and workshops. She’ll have your audience laughing and learning and that’s what it’s all about. Well, *that* and the hokey pokey.